It has been less than a month since the last version of JPEG Saver, but here is another one that does something quite important. There are some other changes, but first comes a big resizing update:

In this version I have improved the resizing options by making them more flexible, more configurable and also less complicated for people who don't want to mess around with loads of options. To make that a bit clearer, here is the less complicated version: 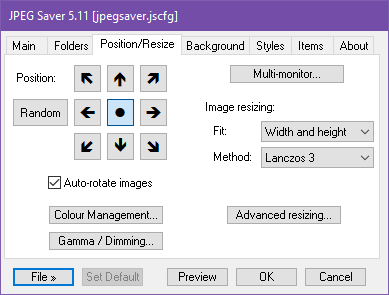 …and here is the more complicated version:

As you may have noticed, there is no button to get back from advanced mode to simple mode. I couldn't fit one in anywhere, so I have added a right-click context menu instead. It is available in simple mode too, so you can use it to toggle between the two modes.

If you are not using the default file locations, JPEG Saver should leave your files where they are. This change is mainly to make things tidier for new users and users who don't make use of multiple config files.

The staggered updates option for multiple-monitor systems now begins staggering after the first images have been displayed on each screen. This is instead of non-primary screens remaining blank until their first staggered update. A change of image caused by key or mouse input will also change all screens at once, followed by a return to staggering.

I have also improved the animation of several transitions that slide chunks of image across the screen. These should do it more smoothly now - in previous versions I was positioning the blocks to line up with the pixels on the screen, which is not really necessary.

The final update is a very small one: there is now a confirmation dialog when you choose the “Clear database” menu option. I was testing with a lot of files, my database was huge and full of metadata and I clicked on that option by mistake. Of course I had a backup, but it was quite annoying anyway.

JPEG Saver 5.11 is available from the downloads page.