What are these for?
These are a bunch of small programs that you can run when you want to know the CRC32 value for a file. CRCDropper 2 does the same job as CRCDropper, except you can also drag a file onto the program icon to start up with the calculated CRC and it looks completely different.

CRCDropper 3 is different to the earlier versions - it supports drag and dropping multiple files, and as well as CRC32 it also supports MD2, MD4, MD5, SHA1 and CRC16 algorithms. And it shows the file size in bytes. It's also quite a bit smaller than the earlier versions. (And version 3.0.1 is smaller than version 3. At this rate version 4 could be shorter than this paragraph.)

So why did you write them?
Someone once said "it would be really handy if I could just drag a file from Windows onto a program to find out the CRC value." So I wrote one. Then I wrote another. Then after someone made some suggestions I wrote the third one.

What's new in CRCDropper 3.5?
"Stay on top" option for keeping the window above others, "Lower case" option for displaying hashes in lower or upper case, multiple-selection of files in the main list, context menu with options to copy the hash value to the clipboard, open the file, open the folder containing the file, export all selected file hashes to separate files or to a single file and saving the selected options to a config file when CRCDropper exits. 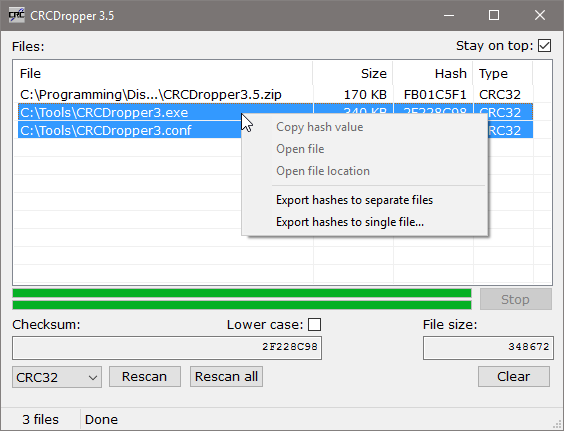 What was new in CRCDropper 3.4?
Proper support for files larger than 2GB, "Rescan all" button to recheck all the files in the list, RIPEMD-160 algorithm option, drag and drop folders to check all the files inside them, remove files from the list using the "Delete" key and rename files by clicking on them when selected.

What was new in CRCDropper 3.3?
The drop-down list of files has been replaced with a list box, the dialog can be resized, you can stop processing with the "Stop" button, and it supports SHA256, SHA384 and SHA512 hashing algorithms too. 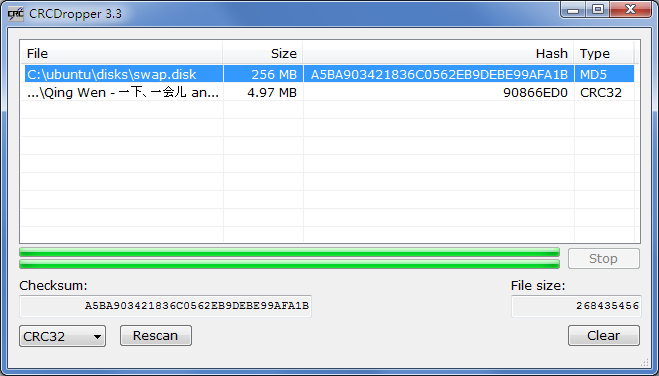 What was new in CRCDropper 3.1 and 3.2?
Version 3.1 was the first version with Unicode string support, so it works better with non-latin characters. Here is a screen grab to illustrate:

It's also the first version compiled with a newer version of Visual Studio and with some minor internal updates that make it bigger than version 3.0.1.

Version 3.2 is slightly updated to work better with Windows 7 - it displays progress on the taskbar.

Where can I get them?
You can download them here: