Here is JPEG Saver 5.18 with the next big change I had planned, which actually went quite smoothly. I wasn't expecting it to be difficult, but it is nice when things just work. This change is quite an obvious one so I've stuck in an image of what's new here: 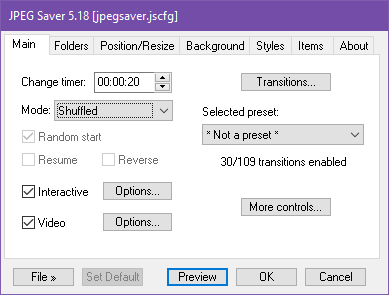 Yes, the list of transitions is gone from the main tab - I needed to add in some more controls, and I couldn't cram them in any more. The “Transitions” button takes you to a new dialog where you can fiddle about with the transitions, and underneath the button is something new.

A lot of what I was working on for version 5.17 was code to support presets of different types, and as a result of that you can now save your transition settings and reload them again quickly from the main tab. I've included a list of default presets that might be handy, or you could just delete them all and make your own. To do that you will need to use the transitions dialog...

The first of the big changes I wanted to get done is included in version 5.17 of JPEG Saver. Unfortunately it is mostly internal, so I'll lead with something a bit more visible.

This has been on the to-do list for a very long time, and it is actually one of the first things I entered into my issue tracking system back in 2016. Now when you enter the folders tab on the config dialog you will see a new box marked “Folder set” along with a button next to it called “Set”

Together these work a lot like the presets in the filters dialog - you can save, load, delete and clear the sets, either replacing the main folders list or appending to it.

There is not as much in version 5.16 of JPEG Saver as I had wanted to get done, but the next few items on the to-do list could take a while and there are a couple of important bug fixes to get out. It also includes a couple of other useful features, so I'm not too disappointed.

The most interesting new option in version 5.16 is in the multi-monitor dialog. In the drop-down list for the main display you will now find an option saying “Span across displays”. What this does is create a single window that covers the whole of your virtual desktop and treats it as one screen.

How well this works really depends on your graphics card being able to cope with it and your different screen positions not causing problems. If you have two identical monitors side-by-side it should work well; in my case the monitors are different sizes, shapes and resolutions so sometimes things are off the bottom edge of one screen. This is because JPEG Saver's display code can only handle rectangular screens and doesn't care that (0,1079) on the virtual screen is somewhere below the bezel on my physical monitor.

This is another small update to TagCanvas, adding something that was suggested recently and fixing a small bug from the previous version.

Turn and face the strange

If you hover your cursor over one of these tags the image should change. This is enabled with the new altImate option, which makes TagCanvas load the second image inside a tag as the active image for that tag. With altImage left as false, the second image is ignored as it was before.

Version 3.10 of SVGGraph is a smaller update, mainly fixing a few things and improving a couple of others.

Until now it wasn't easy to display text in a marker. You could do it using custom markers, but that meant knowing enough SVG to create the marker shape yourself. I know how to do it, but I shouldn't really expect people using SVGGraph to learn SVG just for that. So now you can define text shapes and figures, and since you can use figures in markers you can use text there too:

The first two datasets here have "A" and "B" as their text labels. The third dataset has more text, though I've used a transform to scale it down to the same size as the others. The text in the top left corner of the graph is using a text shape as well, though a custom label would be more flexible there.